Just added to your cart

Does LED Face Therapy bring benefit also to your Thyroid ? Let's find out

Thyroid issues are pervasive in modern society, affecting all genders and ages to varying degrees. Diagnoses are perhaps missed more often than any other condition and typical treatment/prescriptions for thyroid issues are decades behind the scientific understanding of the condition.

The question we are going to answer in this article is – Can light therapy play a role in prevention and treatment of thyroid/low metabolism problems?
Looking through scientific literature we see that light therapy’s effect on thyroid function has been studied dozens of times, in humans (e.g. Höfling DB et al., 2013), mice (e.g. Azevedo LH et al., 2005), rabbits (e.g. Weber JB et al., 2014), among others. To understand why light therapy may, or may not, be of interest to these researchers, first we need to understand the basics.

Hypothyroidism (low thyroid, underactive thyroid) should be considered more of a spectrum that everybody falls onto, rather than a black or white condition that only older people suffer from. Barely anyone in modern society has truely ideal thyroid hormone levels (Klaus Kapelari et al., 2007. Hershman JM et al., 1993. J. M. Corcoran et al., 1977.). Adding to the confusion, there are overlapping causes and symptoms with several other metabolic issues like diabetes, heart disease, IBS, high cholesterol, depression and even hair loss (Betsy, 2013. Kim EY, 2015. Islam S, 2008, Dorchy H, 1985.).

Having a ‘slow metabolism’ is in essence the same thing as hypothyroidism, which is why it coincides with other problems in the body. It’s only diagnosed as clinical hypothyroidism once it reaches a low point.

In a nutshell, hypothyroidism is the state of low energy production in the entire body as a result of low thyroid hormone activity. The typical causes are complex, including various diet and lifestyle factors such as; stress, heredity, ageing, polyunsaturated fats, low carbohydrate intake, low calorie intake, sleep deprivation, alcoholism, and even excess endurance exercise. Other factors such as thyroid removal surgery, fluoride intake, various medical therapies, and so on also cause hypothyroidism.

Red & infrared light (600-1000nm) may potentially be of use to metabolism in the body on several different levels.

The mainstream and generally accepted theory of light therapy’s direct impact involves cellular energy production. The effects are supposedly exerted primarily by photodissociating nitric oxide (NO) from the mitochondrial enzymes (cytochrome c oxidase, etc.). You can think of NO as a harmful competitor to oxygen, much like carbon monoxide is. NO basically shuts down energy production in cells, forming an extremely wasteful environment energetically, which downstream raises cortisol/stress. Red light is theorised to prevent this nitric oxide poisoning, and resulting stress, by removing it from mitochondria. In this way red light can be thought of as ‘protective negation of stress’, rather than immediately increasing energy production. It’s simply allowing your cells’ mitochondria to work properly by alleviating the dampening effects of stress, in a way that thyroid hormone alone doesn’t necessarily do.

So while thyroid hormone improves mitochondria counts and effectiveness, the hypothesis around light therapy is that it may enhance and ensure the effects of the thyroid by inhibiting the negative stress-related molecules. There may be several other indirect mechanisms by which both thyroid and red light reduce stress, but we won’t go into them here. 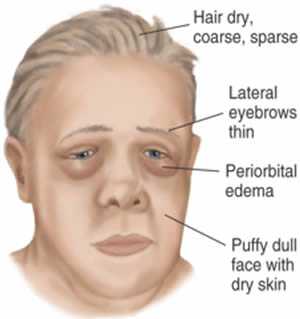 How does the thyroid system work?

Thyroid hormone is first produced in the thyroid gland (located in the neck) as mostly T4, and then travels via the blood to the liver and other tissues, where it is converted into a more active form – T3. This more active form of thyroid hormone then travels to every cell of the body, acting inside the cells to improve cellular energy production. So thyroid gland -> liver -> all cells.

What usually goes wrong in this production process? In the chain of thyroid hormone activity, any point can pose a problem:

Thyroid hormone in the cell

Assuming no impediment exists for thyroid hormone production, and it can reach cells, it acts directly and indirectly on the process of respiration in cells – leading to the complete oxidation of glucose (into carbon dioxide). Without sufficient thyroid hormone to ‘uncouple’ the mitochondrial proteins, the respiration process cannot complete and usually results in lactic acid rather than the end product of carbon dioxide.

Thyroid hormone acts on both the mitochondria and nucleus of cells, causing short term and long term effects that improve oxidative metabolism. In the nucleus, T3 is thought to influence expression of certain genes, leading to mitochondriogenesis, meaning more/new mitochondria. On the mitochondria that already exist, it exerts a direct energy improving effect via cytochrome oxidase, as well as uncoupling respiration from ATP production.

This means that glucose can be pushed down the respiration pathway without necessarily having to produce ATP. While this may seem wasteful, it increases the amount of beneficial carbon dioxide, and stops glucose being stockpiled as lactic acid. This can be seen more closely in diabetics, who frequently get high levels of lactic acid leading to a state called lactic acidosis. Many hypothyroid people even produce significant lactic acid at rest. Thyroid hormone plays a direct role in alleviating this harmful state.

Thyroid hormone has another function in the body, combining with vitamin A and cholesterol to form pregnenolone – the precursor to all steroid hormones. This means that low thyroid levels inevitably result in low levels of progesterone, testosterone, etc. Low levels of bile salts will also occur, thereby hampering digestion. Thyroid hormone is perhaps the most important hormone in the body, supposedly regulating all essential functions and feelings of wellbeing.

As the thyroid gland is located under the skin and fat of the neck, near infrared is the most studied type of light for thyroid treatment. This makes sense as it is more penetrative than visible red (Kolari, 1985; Kolarova et al., 1999; Enwemeka, 2003, Bjordal JM et al., 2003). However, red as low in wavelength as 630nm has been studied for thyroid (Morcos N et al., 2015), as it is a relatively superficial gland.

The following guidelines are commonly adhered to studies:

In the right strength, infrared LED lights could potentially affect the entire thyroid gland, front to back. Visible red wavelengths of light on the neck will also provide benefits, although a stronger device will be needed. This is because visible red is less penetrative as mentioned already. As a rough estimate, 90w+ red LEDs (620-700nm) should provide good benefits.

Other types of light therapy technology like low level lasers are fine, if you can afford them. Lasers are studied more frequently in the literature than LEDs, however LED light is generally considered equal in effect (Chaves ME et al., 2014. Kim WS, 2011. Min PK, 2013).

Heat lamps, incandescents and infrared saunas are not as practical for improving metabolic rate / hypothyroidism. This is due to wide beam angle, excess heat/inefficiency and wasteful spectrum.

LED light therapy or LLLT is well studied and ensures maximum safety. Infrared (700-950nm) LEDs are favoured in this field, visible red is fine too.

Dubovik V. The postoperative rehabilitation of the autoimmune thyroiditis patients with the use of low­intensive laser radiation.